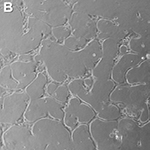 Neovascularization (angiogenesis) is a multistep process, controlled by opposing regulatory factors, which plays a crucial role in several ocular diseases. It often results in vitreous hemorrhage, retinal detachment, neovascularization glaucoma and subsequent vision loss. Hypoxia is considered to be one of the key factors to trigger angiogenesis by inducing angiogenic factors (like VEGF) and their receptors mediated by hypoxia inducible factor-1 (HIF-1α) a critical transcriptional factor. Another factor, nuclear factor kappa B (NFκB) also regulates many of the genes required for neovascularization, and can also be activated by hypoxia. The aim of this study was to elucidate the mechanism of interaction between HRPC and HUVEC that modulates a neovascularization response.

Human retinal progenitor cells (HRPC) and human umbilical vein endothelial cells (HUVEC) were cultured/co-cultured under normoxia (control) (20% O 2) or hypoxia (1% O 2) condition for 24 hr. Controls were monolayer cultures of each cell type maintained alone. We examined the secretion of VEGF by ELISA and influence of conditioned media on blood vessel growth (capillary-like structures) via an angiogenesis assay. Total RNA and protein were extracted from the HRPC and HUVEC (cultured and co-cultured) and analyzed for the expression of VEGF, VEGFR-2, NFκB and HIF-1α by RT-PCR and Western blotting. The cellular localization of NFκB and HIF-1α were studied by immunofluorescence and Western blotting.

We found that hypoxia increased exogenous VEGF expression 4-fold in HRPC with a further 2-fold increase when cultured with HUVEC. Additionally, we found that hypoxia induced the expression of the VEGF receptor (VEGFR-2) for HRPC co-cultured with HUVEC. Hypoxia treatment significantly enhanced (8- to 10-fold higher than normoxia controls) VEGF secretion into media whether cells were cultured alone or in a co-culture. Also, hypoxia was found to result in a 3- and 2-fold increase in NFκB and HIF-1α mRNA expression by HRPC and a 4- and 6-fold increase in NFκB and HIF-1α protein by co-cultures, whether non-contacting or contacting.

These findings suggest that intercellular communications between HRPC and HUVEC lead to the modulation of expression of transcription factors associated with the production of pro-angiogenic factors under hypoxic conditions, which are necessary for an enhanced neovascular response. Our data suggest that the hypoxia treatment results in the up-regulation of both mRNA and protein expression for VEGF and VEGFR-2 through the translocation of NFκB and HIF-1α into the nucleus, and results in enhanced HRPC-induced neovascularization. Hence, a better understanding of the underlying mechanism for these interactions might open perspectives for future retinal neovascularization therapy.