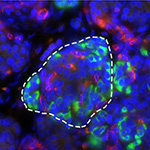 The complex endocrine and exocrine functionality of the human pancreas depends on an efficient fluid transport through the blood and the lymphatic vascular systems. The lymphatic vasculature has key roles in the physiology of the pancreas and in regulating the immune response, both important for developing successful transplantation and cell-replacement therapies to treat diabetes. However, little is known about how the lymphatic and blood systems develop in humans. Here, we investigated the establishment of these two vascular systems in human pancreas organogenesis in order to understand neovascularization in the context of emerging regenerative therapies.

We examined angiogenesis and lymphangiogenesis during human pancreas development between 9 and 22 weeks of gestation (W9-W22) by immunohistochemistry.

Our data suggest that the blood and lymphatic machinery in the human pancreas is in place to support endocrine function from W17-W22 onwards. Our study provides the first systematic assessment of the progression of lymphangiogenesis during human pancreatic development.