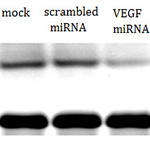 The overexpression of angiopoietin-2 (Ang-2) has both pro-tumorigenic and anti-tumorigenic effects. However, the mechanisms of this protein’s dual effects are poorly understood, and it remains unclear how Ang-2 cooperates with vascular endothelial growth factor (VEGF). In the current study, we investigated the effects of Ang-2 overexpression on nasopharyngeal carcinoma growth in the presence of different levels of VEGF.

Ang-2 was introduced into the CNE2 cell line by liposome transfection, and the expression of endogenous VEGF was inhibited by microRNA-mediated RNA interference. CNE2 cells expressing varying levels of Ang-2 and VEGF were injected subcutaneously into the flanks of nude mice. Tumor growth was measured, and vessels from the harvested tumors were analyzed.

Our results indicate that the effects of Ang-2 on nasopharyngeal carcinoma are highly dependent on the level of VEGF expression, Ang-2/VEGF ratio may offer a novel therapeutic approach for treating human cancer.