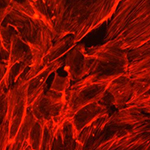 Subjecting VSMC to cyclic biomechanical strain in vitro promotes cell hypertrophy while attenuating cellular proliferation. We also report an upregulation of MEK and ERK activation suggestive of a proliferative phenotype. Hhowever, the proliferative response appears to be aborogated by enhanced antimitogenic cytokine VEGF, NO secretion and downregulation of Cdk expression. Although exogenous VEGF alone is not sufficient to promote the quiescent VSMC phenotype, we provide evidence suggesting that strain is a necessary component to induce VSMC response to the antimitogenic effects of VEGF. Taken together these data indicate that VEGF plays a critical role in mechanical strain-induced VSMC proliferation and vessel wall remodeling. Whether VEGF and/or NO inhibit signaling distal to Erk 1/2 is currently under investigation.