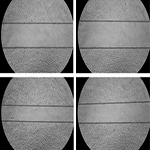 Recent studies have suggested a role for the small GTPase RhoB in the control of processes required for angiogenesis. However, the mechanisms whereby RhoB exerts control over these processes are not well understood. Given the role of vascular endothelial growth factor (VEGF) in pathological angiogenesis, we were interested in examining whether RhoB contributed to VEGF-induced angiogenic processes. To assess this, RhoB was specifically depleted in human umbilical vein endothelial cells (HUVEC), using siRNA-targeted strategies. The effects of RhoB depletion on VEGF-induced angiogenic activities were assessed using a variety of standard in vitro angiogenesis assays to assess endothelial cell viability, migration and capillary morphogenesis. Effects of RhoB depletion on signaling from other Rho family member proteins was also assessed using specific activity assays for RhoA and RhoC. We observed that although RhoB appeared dispensable for HUVEC viability, RhoB was required for endothelial cell migration, sprouting, and capillary morphogenesis. We also observed that siRNA-mediated depletion of RhoB in HUVEC resulted in increased RhoA activation in response to VEGF stimulation. This increased RhoA activation contributed to the cellular morphogenesis defects observed in RhoB-depleted cells, as inhibition of RhoA activity using C3 transferase, or inhibition of the activity of the downstream RhoA effectors Rho-dependent kinases I and II (ROCK I and II) led to a partial restoration of capillary morphogenesis in the absence of RhoB. Thus our data indicate that RhoB plays a significant role in VEGF-induced endothelial cell morphogenesis in part by negatively regulating the activity of RhoA and the RhoA/ROCK pathway.