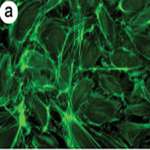 Loss of endothelial cell integrity and selective permeability barrier is an early event in the sequence of oxidant-mediated injury and may result in atherosclerosis, hypertension and facilitation of transendothelial migration of cancer cells during metastasis. We already reported that endothelial cell integrity is tightly regulated by the balanced co-activation of p38 and ERK pathways. In particular, we showed that phosphorylation of tropomyosin-1 (tropomyosin alpha-1 chain = Tm1) at Ser283 by DAP kinase, downstream of the ERK pathway might be a key event required to maintain the integrity and normal functions of the endothelium in response to oxidative stress.

Endothelial permeability was assayed by monitoring the passage of Dextran-FITC through a tight monolayer of HUVECs grown to confluence in Boyden chambers. Actin and Tm1 dynamics and distribution were evaluated by immunofluorescence. We modulated the expression of Tm1 by siRNA and lentiviral-mediated expression of wild type and mutated forms of Tm1 insensitive to the siRNA. Transendothelial migration of HT-29 colon cancer cells was monitored in Boyden chambers similarly as for permeability.

We provide evidence indicating that Tm1 phosphorylation at Ser283 is essential to regulate endothelial permeability under oxidative stress by modulating actin dynamics. Moreover, the transendothelial migration of colon cancer cells is also regulated by the phosphorylation of Tm1 at Ser283.

Our finding strongly support the role for the phosphorylation of endothelial Tm1 at Ser283 to prevent endothelial barrier dysfunction associated with oxidative stress injury.